Mr. Peter Malm, owner of a sub-contract machine shop, MCM Automation in Canada, already used a lot of Nine9 spot drills in his company. When his local supplier, Caliber Industrial Supply showed him the latest indexable chamfer mill from Nine9, he had just the part for it.

He was regularly producing a range of blocks which were part of a welded assembly. They had a tolerance of 0.025mm on position and diameter of a hole which also needed a 0.8mm chamfer top and bottom. Though this seemed like a relatively easy part it presented its own problems. Mr. Malm used to have his operators chamfer the second side with a countersink in a battery operated drill. This was inconsistent and caused rejections when it reached his customer. They would try and put the blocks on the welded assembly and they would get stuck on the chamfer. The customer would then send back the whole batch for checking.
In conjunction with Caliber Industrial’s Sales manager, Mr. Gareth Rhys-Jones, they instigated some changes in the tooling. They job was taking 2 minutes and 40 seconds to produce with a series of HSS drills, a carbide end mill and a standard Nine9 spot drill.

They job was taking 2 minutes and 40 seconds to produce.

The cycle time was reduced to 1 minute and 6 seconds.
Tool life on the chamfer mill has been excellent. 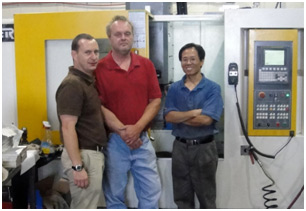